The problems with music in schools derive from the under funding issue in general. The Medford School District tells us that they have half the number of music teachers they need, at best. We see music teachers working part-time at multiple schools. We see no music at all in many intermediate schools. We see the absence of even the songs at American History in grade schools.

We began responding a dozen years ago offering fourth grade assistance to classes in Jackson & Josephine counties. With help from the Carpenter Foundation we obtained 1,500 songbooks which we distributed to the classes from which we taught ten of the basic American songs per year. By now we have met over 5,000 students, The classes for each year have met with our chorus in a theater for a mass sing. It has been the highlight of the year for them.

In our third year of working in high schools we find programs ranging from start-up to 200 students per teacher. In 2015 we sponsored an A Capella Festival for boys of two Medford high schools. In 2016 we sponsored it for 100 boys from Phoenix, Grants Pass and Medford, The skill levels in a large high school class include those who cannot yet match the pitch of those already at the near professional public performance level. The latter group have often had the benefit of private lessons for several years prior to high school. Since the teacher is committed to provide a calendar of musical performances, he or she must teach those who can do that. To alleviate this problem, we have provided a male aid for a female high school music teacher under a grant from the National BHS.

We also sing at local retirement homes, cancer centers, the Festival of Trees (for 25+ years!) and more! Let us know if you would like to request a performance. 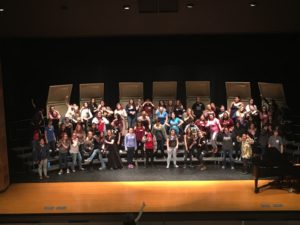 At North Medford High School, Harmonizers and coaches helped with individual coaching and sponsored a men’s acapella festival for about 65 boys and a professional clinician.

These programs have been supported by public donations and by grants from the Carpenter Foundation and the Barbershop Harmony Society.

Over 5,000 elementary students learned to sing from Rogue Valley Harmonizers in classrooms over the past ten years. 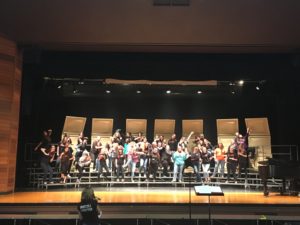 We meet upstairs in the First Presbyterian Church on the corner of 8th and Holly in Medford, OR from 7:00pm to 9:30 pm on Thursday nights. Enter through the lobby of Oregon Pacific Financial Advisors (210 W 8th) and take the elevator to the second floor.